The second annual Maritime Standard Awards, with world famous football star, Ruud Gullit, as master of ceremonies, took place on Monday 9th November at the iconic Atlantis Ballroom, on The Palm. The Awards attracted a high calibre audience of around 600 from across the shipping, ports and related sectors to an event that celebrated and rewarded the achievements of individuals and companies active in the maritime sector in the Middle East and Indian Subcontinent.

Once again the event was held under the patronage of His Highness, Sheikh Ahmed Bin Saeed Al Maktoum. The Maritime Standard Awards founder and managing director, Trevor Pereira, said: “We were very grateful, and humbled, that His Highness supported the awards for a second year. He is someone who has shown real vision over many years and his patronage is a clear indication that this sector is prized and valued at the highest level within the region.”

Dr. Ali Obaid Al Yabhouni, chairman of ADNATCO & NGSCO gave the welcoming speech. He observed, “This event is the highlight of the year for the region’s shipping and maritime industries. It is the perfect occasion to recognise those companies and individuals who have made major contributions to the success of our industry.”

In total 16 awards * were presented to individuals and companies following the deliberation of the judging panel. Clive Woodbridge, editor of TMS and chairman of the judges, said, “This year we received some high quality nominations and entries in all categories and I think we were all impressed by the level of quality, and commitment, that is being shown in so many different parts of the industry in the Middle East and Subcontinent. It was a hard job to separate the winners, and not just those who went away with an Award, but all of those shortlisted, can be justifiably proud of their achievements over the past year.” 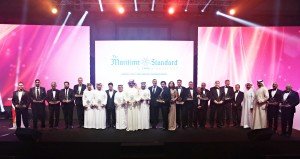 In addition to the awards determined by the judging panel, there were 9 special awards presented by the TMS team for particularly special achievements. Sheikh Talal Al Khaled Al Ahmed Al Sabah, Chief Executive Officer of the Kuwait Oil Tanker Company (KOTC), was presented with the coveted The Maritime Standard Personality of the Year Award, while His Excellency Sultan Ahmed Bin Sulayem was given The Maritime Standard Hall of Fame Award for his contribution in developing Dubai’s ports sector. Zahid Rahman, vice president, business development, marine, Lloyds Register (LR), for the Middle East, Africa and Pakistan was presented with the Maritime Standard Lifetime Achievement Award for his role in making LR a powerful force within the shipping industry in the Middle East.

Other awards selected by The Maritime Standard included Jasmine Fichte who was the recipient of the Woman in Shipping award for her work within the maritime law field, and Abdullah Bin Damithan, from DP World, who secured the Young Person in Shipping Award. Andre Toet, chief executive of Sohar Port Corporation was given the TMS Editor’s Choice Award, for his contribution to the Omani port; Dr. Ali Obaid Al-Yabhouni, the TMS Excellence in Shipping award in recognition his work at ADANTCO & NGSCO and OPEC; and the Suez Canal Authority scooped the Deal of the year for the financing of the Suez Canal widening project. There was also a special Legion of Honour Award to George Chapman who has worked in the ports sector in the UAE since the 1950s and made an important contribution over six decades.

Trevor Pereira added, “The evening was even bigger and better than last year. To have an audience that was really a ‘Who’s Who’ of the industry, was tremendous, that so many high quality people came, from more than 60 different countries, is testament to the importance of these awards not just on a regional, but now at a global level.”
Editor’s Note. The full list of the Award winners are as follows: