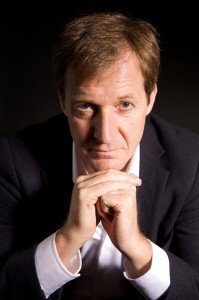 The Maritime Standard Awards, which are being held under the patronage of His Highness Sheikh Ahmed bin Saeed Al Maktoum at the Atlantis, Palm Jumeirah, on Thursday 6th November 2014, have achieved a notable ‘coup’ in securing the services of the renowned journalist, PR guru and political ‘spin doctor’ Alastair Campbell as Master of Ceremonies. Campbell, best known for being the press spokesman for Tony Blair during most of his time as Prime Minister, is certain to raise the profile of the inaugural awards, which aim to reward and recognize achievement in the ports, shipping, transport and related industry sectors across the Middle East and Indian Subcontinent.

Barely able to conceal his delight at securing such a ‘heavy hitter’ to front the awards in their first year, The Maritime Standard Awards founder, Trevor Pereira, says, “This is a real first for the industry. Up to now maritime business awards have tended to have well known broadcasters and journalists as their MCs. Now we have taken it to a new level by recruiting one of the real political heavyweights of his generation and as a result this is going to be an event where everyone will want to be. The TMS Awards will certainly be one of the hottest tickets in town.”

Alastair Campbell was Tony Blair’s press secretary from 1997 to 2003, having previously worked as political editor of the Daily Mirror and as an advisor to former Labour leader Neil Kinnock. He has since become a best-selling writer, publishing political commentaries and novels. He has also been a leading campaigner seeking to break down the stigma around mental illness, drawing on his own experiences battling depression.

The finalists in the various categories of the TMS Awards, which will be attended by leading names from across the shipping and maritime sector, are due to be announced in the next week, with the winners on the night to be determined by a stellar panel of judges chaired by the editor of TMS, Clive Woodbridge. The panel also includes H.E. Salem Ali Al Zaabi, Angus R Frew, Dr. Priyath Wickrama, Jorn Hinge, Saadi Al Rais, Radhakrishnan Luxman IAS (Rtd), Abu Bakar Bin Mohd Nor, Capt. Jitendra Misra, Abhishek Pandey, Mohamed Sherine El Naggar, Alice G Vaidyan and Capt. Rohan Codipilly.