16 September 2015, Dubai UAE: One of the most famous football players of all time, Ruud Gullit, will host The Maritime Standard Awards, which will take place at the iconic Atlantis Ballroom, The Palm, on November 9th 2015. Ruud had an accomplished playing career with a host of leading European clubs, including PSV Eindhoven, AC Milan, Sampdoria and Chelsea, as well as the Dutch national team, winning numerous trophies along the way, including the UEFA European championships in 1988, in which he scored during a 2.0 win over the Soviet Union. He then enjoyed a successful spell as a manager, with Chelsea, Newcastle, Feyenoord and LA Galaxy, before carving out a career as a well-respected football pundit on TV. 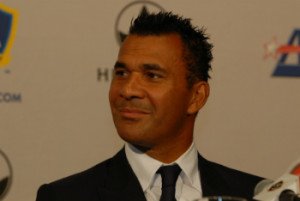 Ruud Gullit is sure to bring a touch of glitz and glamour to the awards event, which is being held under the patronage of His Highness Sheikh Ahmed Bin Saeed Al Maktoum, President of the Dubai Civil Aviation Authority and Chairman and Chief Executive of Emirates Airline and Group, and which already boasts a line-up that is virtually a ‘Who’s Who’ of the shipping and maritime industries in the Middle East and Indian Subcontinent. Ruud Gullit has expressed his excitement at making his trip to Dubai, “I am looking forward to coming to Dubai and hosting The Maritime Standard Awards at the Atlantis on 9th November. It is a big night in one of the World’s key shipping hubs. Hope to see you there,” said Gullit.

Endorsed by the Federal Transport Authority (FTA), The Maritime Standard Awards aims to recognise the achievements of organisations and individuals in the region’s shipping, ports and other maritime sectors. Supporting organisations include BIMCO, The UAE Shipping Associations (UAESA), The Dubai Council for Marine and Maritime Industries (DCMMI), Dubai Shipping Agents Association (DSAA), and The Organisation of The Islamic Ship-owners Association (OISA). Many of the region’s leading shipping and ports organisations and companies have also agreed to sponsor this event, which features a total of 25 different awards.

The star-studded Maritime Standard Awards is organised and run by Flagship Events, a Dubai-based company. Managing director, Trevor Pereira, says, “We are honoured that the event will be held under the patronage of His Highness Sheikh Ahmed Bin Saeed Al Maktoum, who is one of the most inspiring business leaders in the region. The fact that His Highness has agreed to bestow his patronage on the Awards for the second year in a row validates the importance of the region’s shipping and maritime industry.”

Trevor also expresses his delight at having such a well-known celebrity as Ruud Gullit on-board as master of ceremonies. Trevor adds, “Ruud was an inspirational footballer and is an equally inspirational speaker. He will bring a further touch of class to the proceedings I am sure.”

This year the awards have attracted a huge amount of attention with a record number of nominations coming in from an extremely high calibre of entrants. Chairman of the judging panel, and editor of The Maritime Standard, Clive Woodbridge, says, “We have been overwhelmed with entries from across the industry, which shows that these awards are already widely perceived to have real value and to be worth competing for. It will be a hard job for the judges to select the winners from the many high quality entries we have received, and I am looking forward to an exciting night.”